APN organized a multi-stakeholder regional workshop on the 29th of March in Beirut-Lebanon to discuss the implications of protracted crises on food security and nutrition in the Arab region. The conference was held in partnership with ESCWA and under the patronage of the Lebanese Minister of Agriculture Ghazi Zeaiter.

It was attended by government representatives from conflict-inflicted countries, including Yemen, Palestine, Iraq, and Palestine; regional and international intergovernmental organizations; civil society organizations from 9 different Arab countries; donors; as well as participants from the private sector. The opening session was moderated by Mr. Abdellah El Blihi, president of the National Confederation for Artisanal Fisheries in Morocco. In her welcoming remarks, APN Co-Founder and President of the Arab Network for Food Sovereignty (ANFS), Ms. Razan Zuayter, stressed the importance of regional integration among countries rather than cooperation and spoke about ANFS’s key role as a platform to unify Arab civil society efforts.

His Excellency Ghazi Zeaiter, Minister of Agriculture of Lebanon, welcomed ANFS as a unique regional civil society platform. Zeaiter noted that the Arab region is the largest wheat importer in the world; importing around 50% of its needed calories; even though 53-84% of its population work in the agricultural sector. Zeaiter stressed the importance of linking humanitarian aid with agricultural development through increasing investments in agricultural research and supporting small farmers, and the importance of developing legislation in relation to use of natural resources. 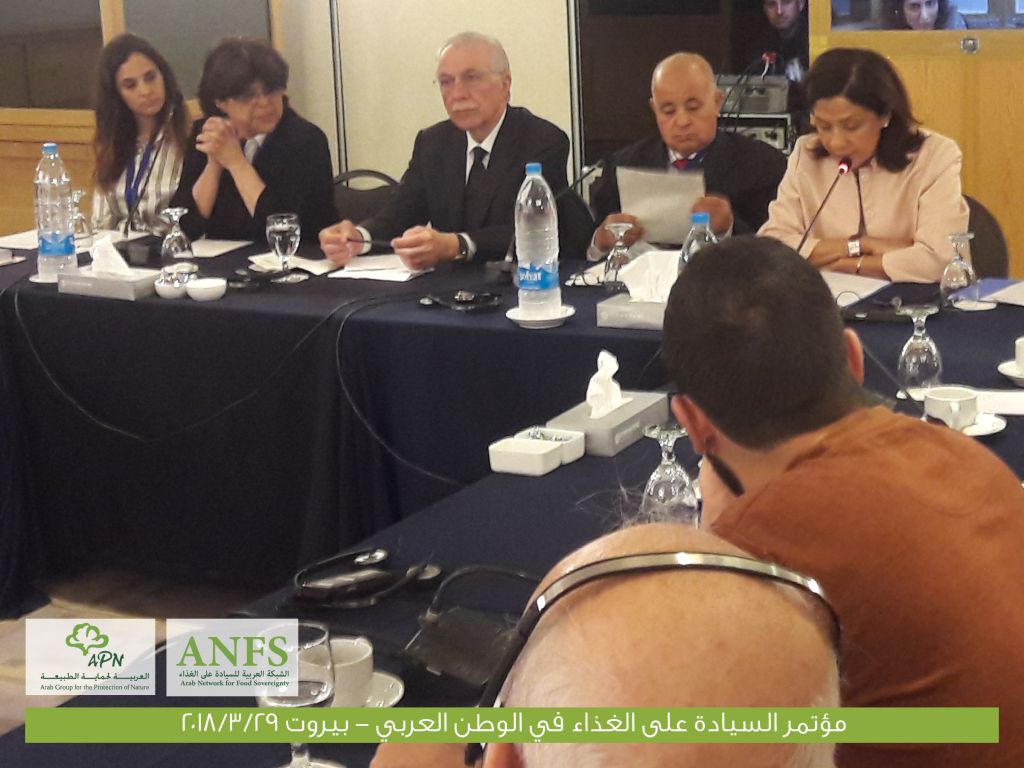 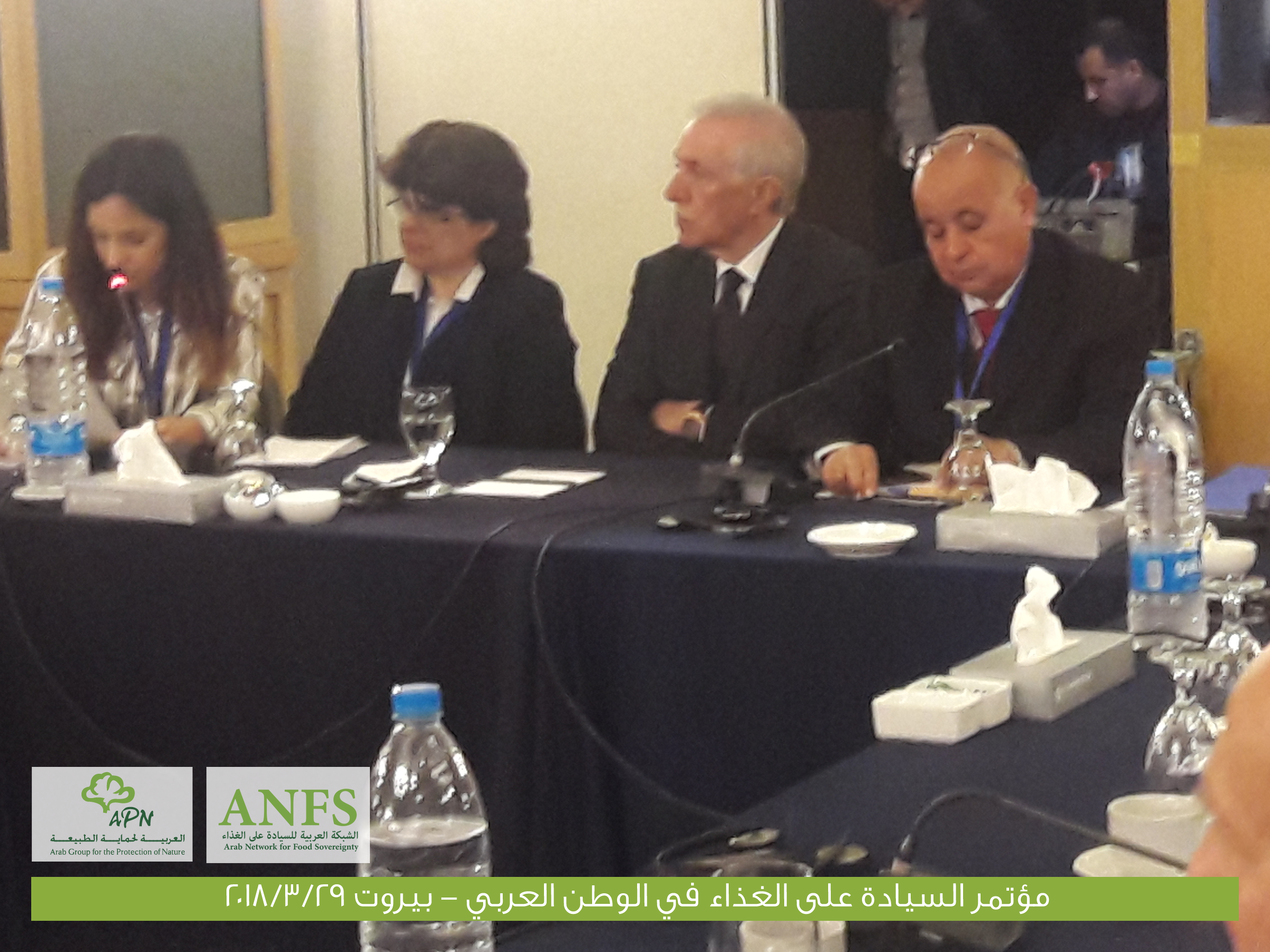 Ms. Khawla Mattar, deputy executive secretary of ESCWA, highlighted in her speech that food security is a human right and an important element of the 2030 Sustainable Development Goals. She introduced “Arab Horizon 2030: Prospects for Enhancing Food Security in the Arab Region”; a report prepared by ESCWA with the help of FAO, which was built around three axes, local food production, reliable trade, and food wastes.

The first session encompassed technical presentations to supply the participants with additional background information on the topic. Mr. Ayman Omer, NENA senior field programme officer at FAO, noted that 70-80% of Syrian and Yemeni populations are food insecure, and that 76% of the total number of refugees globally (50 of 65.5 million) are Iraqi, Libyan, Sudanese, Syrian and Yemeni.

He also indicated that countries in the region that suffer conflict spend 21%-67% of their GDP on conflict related expenditures. In addition, he pointed out that in six years damages to the agricultural sector in Syria were estimated at 16 billion dollars.

Mr. Fidele Byiringiro, economic affairs officer at ESCWA, indicated that conflict affects all 4 dimensions of food security (availability, accessibility, utilization and stability), adding that 80% of children experiencing stunting in the region are from countries under conflict.

Ms. Mona Mousawi, president of the Iraqi Society for Nutrition and Food Safety, declared that 2 million Iraqis suffer food insecurity. Mousawi noted that poverty rates in the areas captured by ISIS are 40%, while poverty in Iraq as a whole has risen to 32%. In addition, she noted that Iraq faces a serious challenge with surrounding countries due to transboundary water issues. 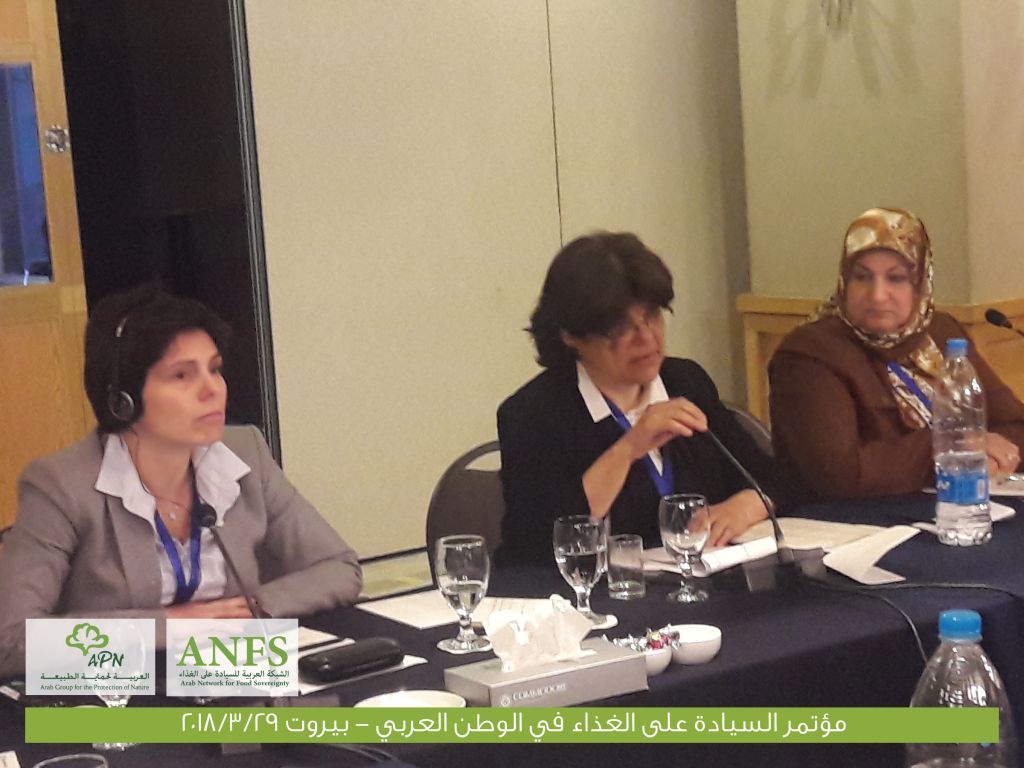 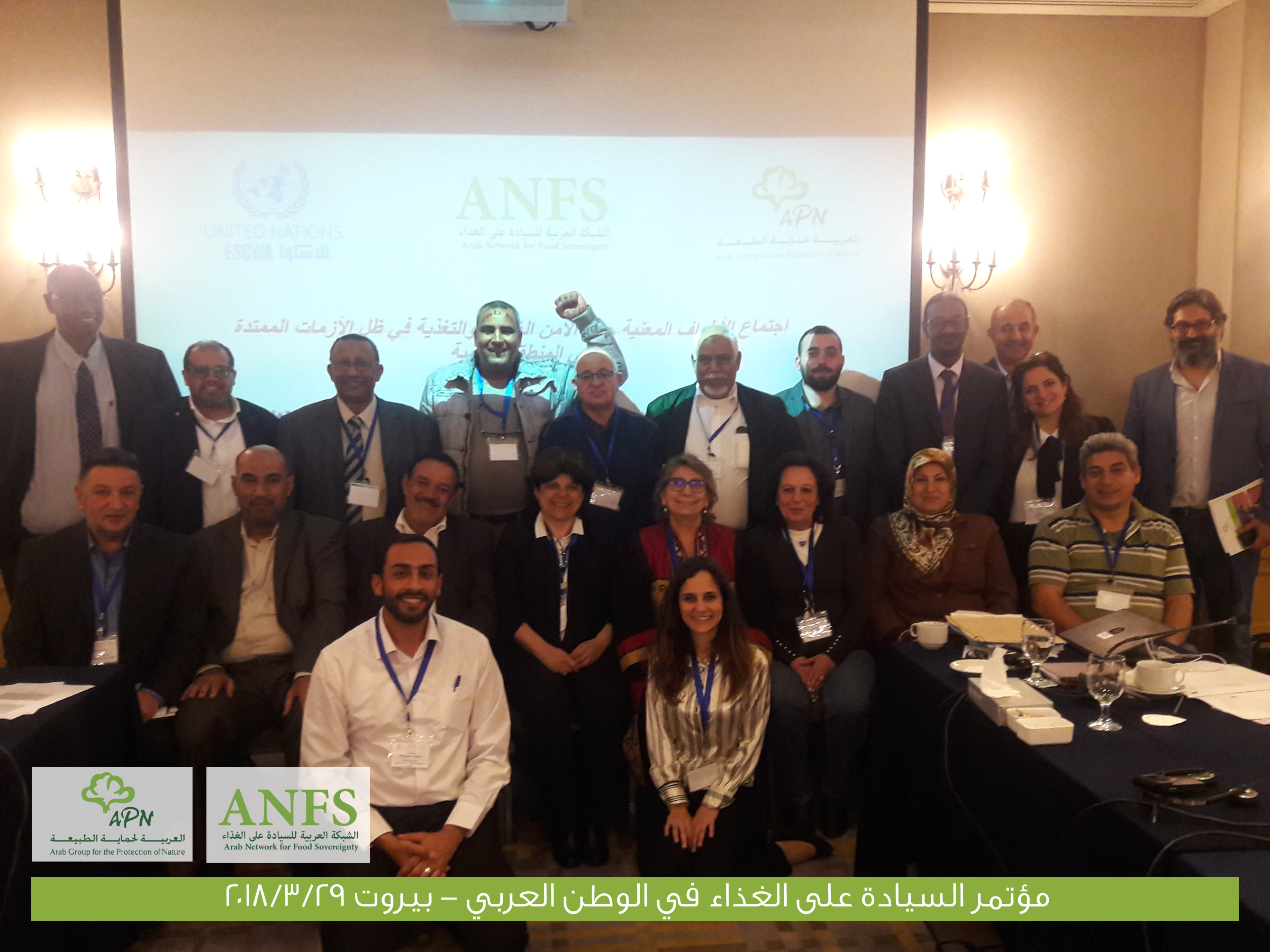 Ms. Raquel Moreno, head of programme at WFP, stated that there is a strong relationship between conflict , food insecurity and migration, she noted that countries are vulnerable after wars end and are 40% likely to return to conflict within a decade. Mr. Mohammad Bashir, president of the Union of Agricultural Cooperatives in Yemen, noted that 60-85% of the Yemeni population is food insecure and 7 million Yemenis suffer from famine. He added that WFP supplies food assistance to less than half of those in need. In addition, he noted that indiscriminate attacks targeted agricultural facilities, markets, schools, health centers, food and water supply routes. Both physical damages and the shortage of oil caused more than 6 billion $ in agricultural losses.

Finally, Ms. Valentina Calderon Mejia, first economic affairs officer at ESCWA noted that conflict hinders biological development, learning, skill formation and cognitive skills and stressed that early interventions to meet the needs of children are necessary.  Following the contextualization of the implications of conflict on food security in the region, APN General Manager Mariam Jaajaa introduced the main principles of the Framework for Action for Food Security and Nutrition in Protracted Crises (FFA) which include:

4. Protecting those at risk from protracted crises

9. Adopting an approach sensitive to conflict

Participants split into groups and discussed challenges and opportunities to applying the principles. There was consensus on the necessity to create follow up committee comprised from ANFS, ESCWA, FAO and the Arab Organization for Agricultural Development (AOAD). The committee would present the FFA to agricultural ministers and develop an action plan that interprets the FFA into programmes and policies. 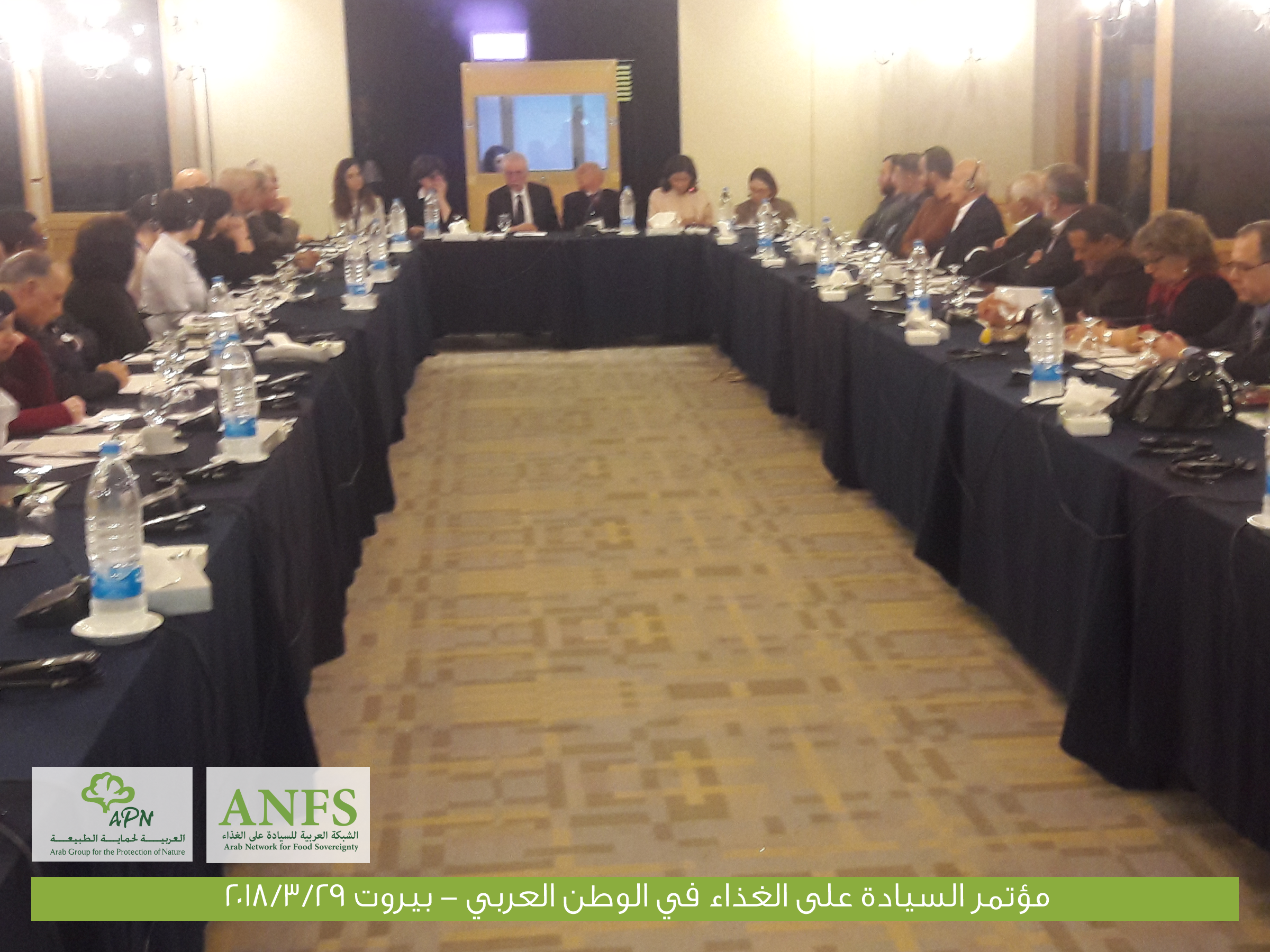 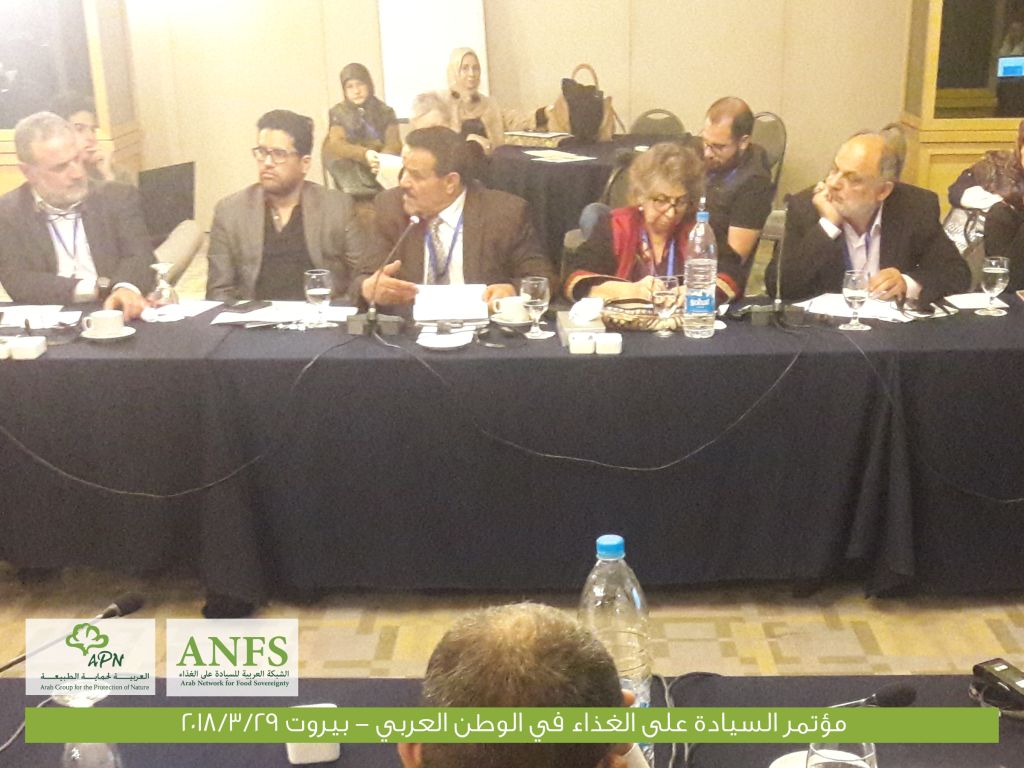